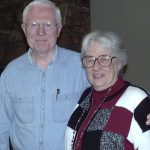 Do you know what day it is? It’s June 9th, also known as Leeper Day. No, we don’t go around leeping around our homes, or on bungie cords as one person thought when we told them about Leeper Day.

Shelby Sharpe, the attorney who filed Leeper, and his wife Martha.

Leeper Day is to memorialize the Texas Supreme Court Decision of June 9th, 1994, which gave homeschoolers in Texas the freedom to homeschool WITHOUT state testing, state mandated visits from teachers, or state mandated portfolios or visit from government officials to be sure our homeschool measure up to state standards, or other requirements found in other states. Because Leeper was decided in our favor, we are not under Legislative oversight in any way.

Leeper Day is when we remember that because a group of parents hired Shelby Sharpe, an attorney in Fort Worth, to represent them as a group before the Courts we are free to homeschool. Why did this group of parents go to such extreme measures? It was simple, over 50 families across Texas had been arrested and hauled before courts, some put in jail and many court ordered to put their children back into public school. There were only about 10,000 families homeschooling back in the 80s, but it soon became part of their teaching to have “visitor drills”, where if someone knocked on the door during “school hours”, the children were to go into a back bedroom and be quiet until the visitor was gone.

So how do we celebrate Leeper Day? We go outside. We go to parks, to restaurants, to fun places, to the many places that homeschoolers would not have gone before 1994 for fear of being turned in and arrested.

Governor Abbott  Proclamed June 9th as Leeper Day in 2015. We hope your group will go out in public at a park, swimming pool, or indoor play place and enjoy your freedom of Leeper Day. Homeschoolers did not openly participate in public activities before Leeper was declared. Tell your children about the history of homeschool in Texas.