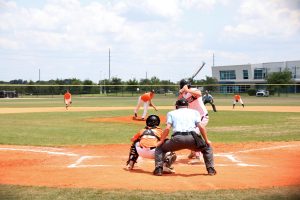 The days are long and hot, the teams are running low on pitching, and everyone is beginning to feel the effects of their earlier games. The players keep their spirits up despite those factors and continue to try their best. Thursday proved to be a day of upsets and disappointment for most of the Texas teams, as none are in the running for the National Championship.

The Falcons in the field against the Faith Stallions.

One of the winning teams, the Houston Falcons, beat the OKC Broncos 5-4 in their second qualifying game this morning. They won on a walk-off run, and advanced on to Division One. Unfortunately, their momentum didn’t carry them to a second victory, and they lost to the Faith, NC Stallions 4-7. They are now in the losers’ bracket of Division One. 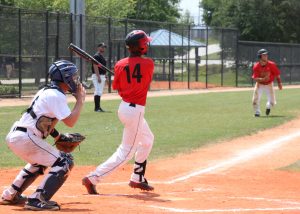 The Riders get ready to score.

Fort Worth Riders lost to the Tulsa Jaguars in a major upset of 6-12. There was a clock discrepancy that ended the game at the end of the 6th inning. They’re in the D1 loser’s bracket as well. 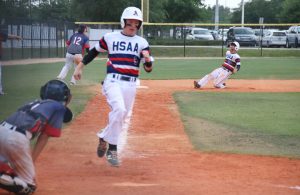 The Angels score in their game against Raleigh.

Dallas Angels lost to the Raleigh Warriors 5-9, sending them to the D1 losers’ bracket.

The Spring Mustangs beat the Memphis Eagles 7-4, and are still in the running to win Division Two. 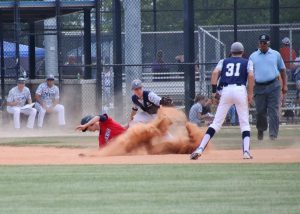 The Houston Eagles fought hard in their game against the OKC Broncos, but couldn’t pull ahead. They lost 8-11, and move to the losers’ bracket of D2.

Tomorrow will prove to be interesting with two Texas matchups. Stay tuned for the results.