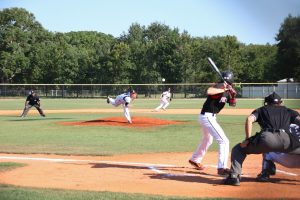 The Angels defeat the Mustangs in a cross-state Qualifying Round matchup.

The morning of day two began with two-thirds of the teams hopeful to have a chance to play for the Championship. Now, at the end of the day, only one-third still keep that hope alive. It’s always tough to look forward to something all year long, only to lose that dream in one game, but such is the crucial nature of the Qualifying Round. There are Texas teams in both the hopeful and disappointed groups tonight.

The Houston Eagles (seeded 11th) lost 5-8 to the Faith, NC Stallions (seeded 6th) after the teams passed the lead back and forth. They will now compete in Division Two.

The Dallas Angels (seeded 7th) battled and beat the Spring Mustangs (seeded 10th) 3-0 in a cross-state showdown. The Angels advance to D1, the Mustangs to D2.

The Fort Worth Riders (seeded 4th) beat the Richmond Patriots (seeded 13th) in a high-scoring game of 13-11, and advance on to D1.

With a final score of 7-4, the Houston Falcons (seeded 14th) upset the 2-0 Oklahoma City Broncos (seeded 3rd). Because the Broncos went 2-0 yesterday, the Falcons will have to beat them again to advance to D1.

The West Houston Thunder and Waukesha Saints played a tight game that ended in dramatic fashion with a walk-off run by the Thunder to break the tie at 7-6.  The game determined who would get the Third Division bye.

Wednesday is an open day for all the teams, and many will take advantage of the opportunity to rest up and prepare for the next set of games.  Having played three games in two days, pitching depth is a foremost concern for all the coaches in the tournament. As the quarter-finals begin for all three divisions on Thursday, we will see which teams have the pitching to propel them forward in the tournament.