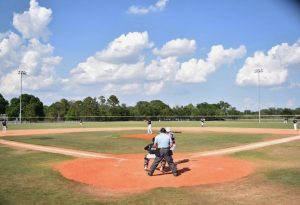 Day four comes to a close, and the day looked a little brighter for Texas teams. They came back and fought hard against heat and fatigue, and had some good success on the fields today.

The Falcons in the field against the Angels.

Texas teams won both halves of the loser’s bracket of Division 1. The Houston Falcons crushed the Dallas Angels in a Texas matchup 13-2, hitting their third homerun of the tournament in the game. In the other half of this bracket the Fort Worth Riders beat the Charlotte Stampede 11-1. Tomorrow the Riders and the Falcons will battle for 5th place, which will be the highest place achieved by a Texas team in the tournament. The Angels will play tomorrow for seventh place.

In Division Two, the Spring Mustangs lost to the Oklahoma City Broncos 6-12. They will battle tomorrow for eleventh place. 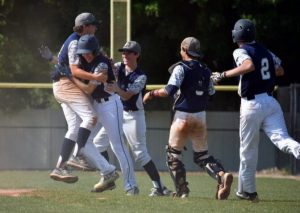 The Houston Eagles fended off a late comeback attempt by the Memphis Eagles with a walk-off run in the bottom of the 7th inning, ending the game 5-4. They will face St. Louis tomorrow for thirteenth place.

Tomorrow’s national championship will be played without any Texas teams for the first time in many years, when the Tulsa Jaguars face the Raleigh Warriors.  Although they won’t be fighting for the overall title, all of the Texas teams will be playing tomorrow for pride and the chance to end the tournament with a win – something that will help ease the waiting for the next 51 weeks until they’re given a chance to come back to make another run for the Cochran Cup.